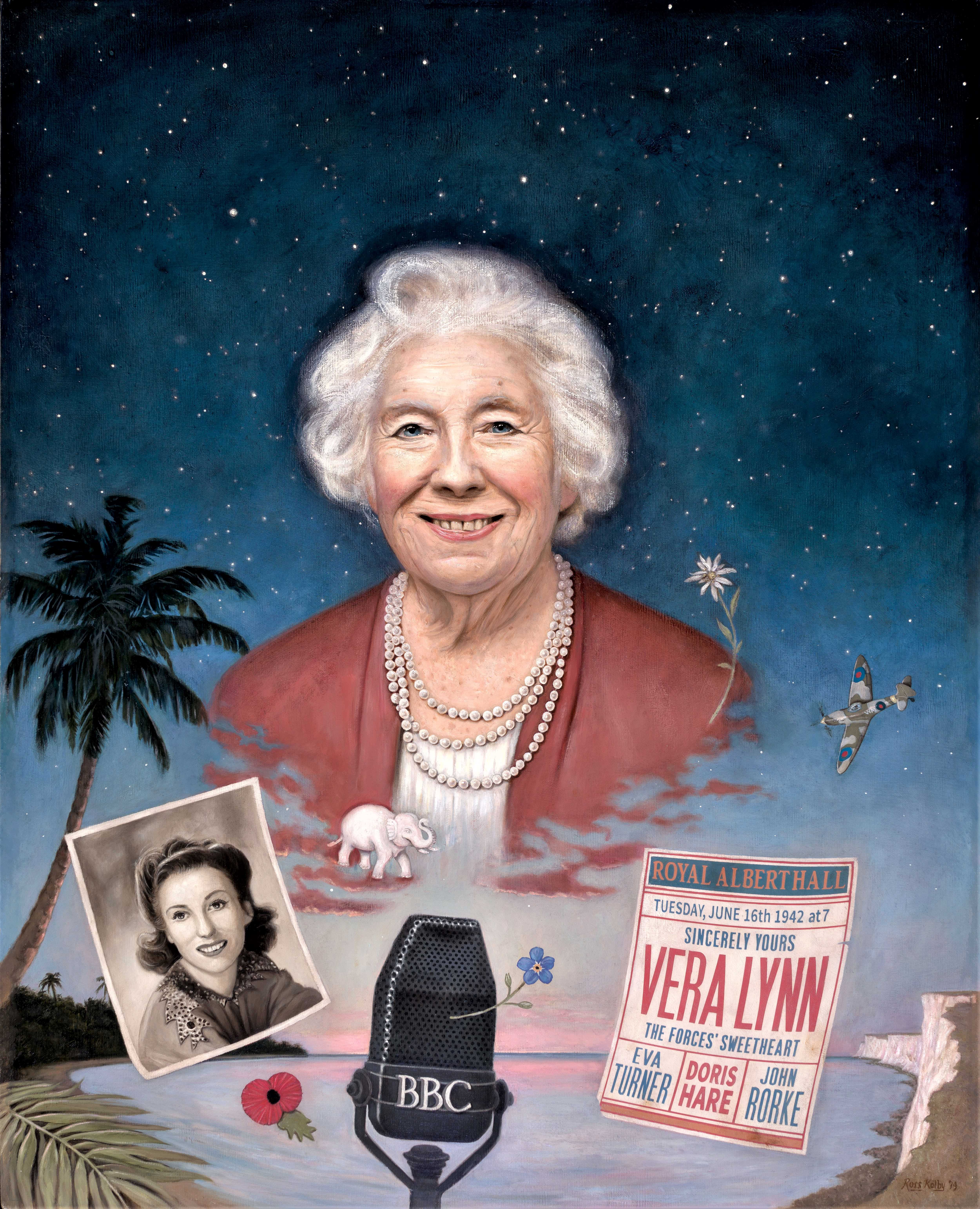 One voice sounded particularly clear through the years of WWII and became a symbol of the wartime era and an inspiration for the Allied troops worldwide. It belonged to ‘The Forces’ Sweetheart’; Dame Vera Lynn (1917-2020)

In the summer of 2019 Kolby was commissioned by the London Mint Office to portray the iconic singer. The painting was to commemorate Lynn’s unique and historic contribution in WWII in the year celebrating the 75th year jubilee for the peace in 1945.  The portrait was unveiled at the Royal Albert Hall – a venue where she performed 52 times from 1937 to 2006.

The portrait was carried out by Kolby in collaboration with Lynn herself and her family. He visited the then 101-year-old singer in her home in Ditchling close to Brighton, and made a sketch for the portrait.

Sketch.
‍
As WWII broke out in 1939 Vera Lynn was a 22-year old highly popular recording artist in theUK. During the darkest days of the Second World War in 1941 she started the radio program Sincerely Yours on theBBC where she sent messages to the British troops worldwide and sang. She ended all shows with We’ll meet again - and the song’s legend was sparked.

The program was to great inspiration and comfort not only to the troops but also to the war-torn public in all Allied countries listening to the BBC.  Another legendary song that evokes WWII is The White Cliffs of Dover which Lynn first performed in 1941, and that soon became an iconic symbol on the hope of a free Europe again.

During the war years Lynn joined The Entertainments National Service Association (ENSA) which provided the troops with entertainment worldwide. She toured Egypt, India and Burma giving outdoor concerts for tens of thousands of military personnel.

Her tour in Burma before The Battle of Kohima in 1944 lasted for more than three months and she all the way ran the risk of being captured by Japanese troops as she drove through the jungle. The leader of the tour, Captain Bernard Holden noted her 'courage and her contribution to morale.'

Lynn’s astonishing voice and sincere personality soon gave her a unique position amongst the men in the military camps from all over the Allied world, and she has like no other artist become synonymous with WWII and the true voice of that era. In 2000 Lynn was named the Briton who best exemplified the spirit of the 20th century.

She continued a highly successful post war career with various shows and numerous tours and concerts. As late as in 2009 she reached No. 1 on the British charts with her album We'll Meet Again: The Very Best ofVera Lynn. She became the oldest recording artist in the world when she reached No. 3 on the charts with Vera Lynn 100 in 2017.